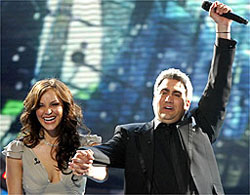 Of all the things to come up with a conspiracy theory for, the “good” people at NPD have suggested that Cingular may have been responsible for skewing the results of all the past American Idol contests.

If you’ll notice, all five of the winners have been southerners. As luck would have it, Cingular has had an exclusive deal with the Idol franchise for the text messaging system for casting votes, and wouldn’t you know it, the majority of the service provider’s customers are from the south. 20 million of them, in fact. In addition, of the 18 million Cingular subscribers who use text messages regularly, more than half are also from the south.

Some may be quick to point out that if it’s just a little more than half in the south, wouldn’t the other half be from the north? Bear in mind that the United States is generally divided into four “regions”, with the south and north referring to the southeast and northeast, respectively. The other two regions — central and west — are sometimes forgotten when this kind of terminology comes up.