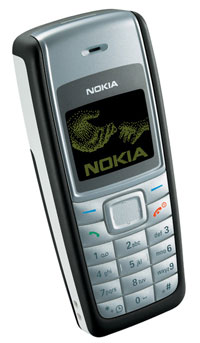 It seems that when it rains in Finland, it pours. Nokia is getting ready to unleash no fewer than five new cell phones upon us, the undeserving public, unveiling the 6080, 1110i (pictured right), and 6151 for the GSM crowd and the 6275(i) and 2875(i) for the CDMA lovers of the world.

On the ultra basic end of things is the 1110i (hence the tiny model number). To retail for 45 euros, this simple candybar is being targeted at first time users (are there still any of those out there? With units like the Migo, even preschoolers are rocking cell phones these days). By the looks of things, the 1110i doesn’t even have a color display. Take a step up and consider the tri-band 6080 with FM radio, camera, and EDGE. To be available in the fourth quarter, the 6080 will sell for about 180 euros.

The only 3G phone among the handful unveiled today is the 6151. Featuring a 1.3 megapixel camera, Series 40 software, 30MB on-board memory, and WCDMA, the 6151 is expected to drop for 240 euros later this summer, making it the least expensive 3G phone from Nokia.

Nokia’s even got some new goodies for the CDMA users in the crowd. The 2875 has a 1.3 megapixel camera, whereas the 6275 sports a 2 megapixel shooter. The latter also comes with an integrate music player, among other standard fare like Bluetooth. No word on pricing, but they should start shipping in the fourth quarter.