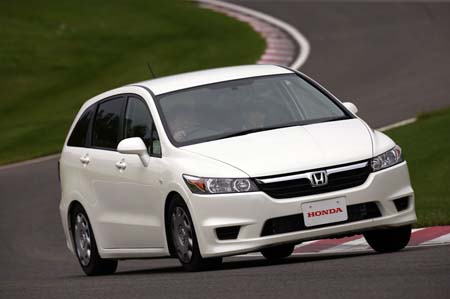 While the Stream from Honda doesn’t sport conventional minivan sliding doors, there are three rows of seating here and the low, aggressive stance makes me think that this thing can attack the cones with the best of them. The big H gave the Stream a redesign for 2007, and they’re gearing up to release the mini-minivan in the European and Asian markets.

Much like the rest of Honda’s line-up these days, the Stream features a large, prominent emblem in the front grille. The headlights are very similar to the current Civic, with the tail light cues coming by way of the CR-V. The third row of this seven-seater folds flat, and the rear doors open up like a regular sedan or wagon. Standard features seem to include traction control and an automatic transmission, with likely two engine options (one of which could be i-VTEC).

There are rumblings that Honda plans on bringing this to North America, and if they do, the Mazda5 just might have a major competitor on its hands in the sporty, compact minivan segment. If they toss in a 4WD or AWD drivetrain, I can see the Stream taking the growing crossover market by storm.