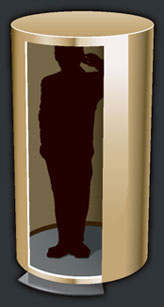 First, there were the speakers that turned your iPod into a home stereo system. Then there were the laptops that you could hook up to your TV and watch movies. Now, we have a BYOP (Bring your own phone) booth—for cell phone users.

Yes, the phone booth of old is back in circulation, this time aimed at mobile phone users. It looks like the old sliding-door booths, and it is more soundproof than the noisy bar or restaurant in which most people choose to have mobile phone conversations these days.

The aptly named C.P. Booth is getting most of the press because of this retro phone booth, but it is by no means the only manufacturer of such privacy-inducing structures. A company out of Massachusetts has come out with the Cell Zone, a futuristic-looking steel cylinder with a clear door.

Both products are aimed at getting those who must yak on their mobile phones out of earshot of those who don’t want to hear that yakking. A side benefit, of course, is that the talkers can actually have a somewhat normal-sounding conversation in the relative isolation of the Booth or the Zone.

Still, it does beg the question of who is in charge. You can certainly turn your mobile phone off when you’re in a public place, thereby eliminating the need for any kind of “private place.” The reality, however, seems to be the opposite, and these manufacturers are merely cashing in on a trend that they see as only growing.