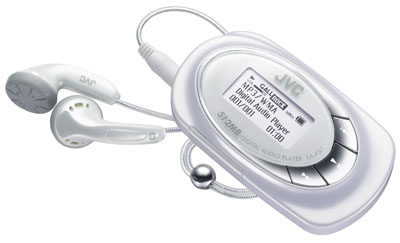 Just what we need – another company making an MP3 player. This time it is JVC, who have made a name for themselves in other realms. The company has launched two new players with some awkward names – the XA-F57 and the XA-F107. Their range of colors – white, silver, blue, pink or red – are more impressive than their memory capacities – just 512MB or 1GB. It will be interesting to see if they can compete at those comparatively small capacities, especially since the 512MB model starts at about $145.

The price isn’t particularly justified by the features, either. Neither model features an FM tuner or a voice recorder. They do have line input for recording at least. The LCD display is backlit and has three lines of text for basic information. The lithium ion battery, which charges via the USB connection, is reputed to provide 11 hours of power. The player weighs 39 grams and can play MP3, WMA and WMA DRM files.