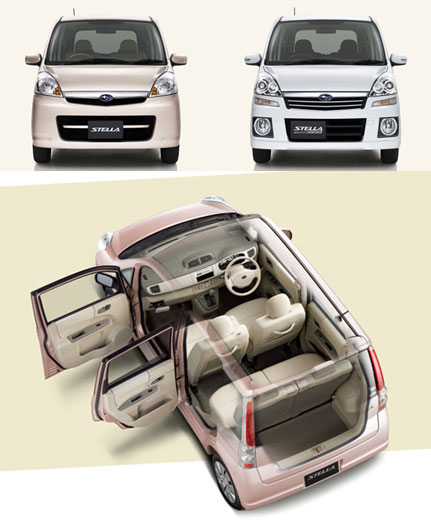 Designed with the estrogen-fueled segment of the population in mind, the Stella from Subaru is a cute car that’s not only practical and functional, but looks quite pretty doing it. Available as the base Stella and as the Stella Custom, this compact people mover comes powered by a 658cc (yes, less than a litre) EN07 four-banger with dual overhead cams. On the simpler end of things, you can go front wheel drive, but for some more rugged terrain and to properly transfer the snowy roads in the winter, you may want to opt for the AWD version. The transmission is of the continuously variable variety.

The Stella L and LX, as well as the Stella Custom R make a fuel sipping 54 horsepower, whereas the RS – with the aid of a supercharger – is capable of developing an incredible 64 horses. Sound a little on the weak side? That’s because these are destined to be Japan-only releases where the city cars are meant to be as light and fuel efficient as possible (54mpg with the FWD Stella). After all, unless you’re Takumi Fujiwara of Initial D fame, you aren’t going to go much faster than the posted speed limit anyways.

Available clad in a soft palette of shades, like powder pink, the Stella and Stella Custom are distinctly feminine and come with all sorts of “storage nooks, hooks, and crannies.” No word on pricing.