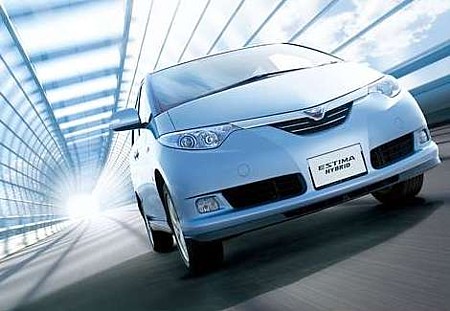 While it has only been these past couple of years that hybrids other than the Prius have received significant attention, Toyota has been working on different applications of its Hybrid Synergy Drive for some time now. Take, for example, the Estima that came out back in 2001 as the world’s first hybrid minivan. Revolutionary, at the time. Revolutionary, today. Well, the Japanese automaker has given the hybrid minivan a facelift and is ready to reintroduce everyone to the Estima.

Featuring the Toyota Hybrid System II, the Estima hybrid minivan comes with an electric all-wheel-drive system known as “E-Four.” The electric motor in the front develops 140 hp and 200 lbs-ft of torque, whereas the rear one is capable of 66 hp and 95 lbs-ft of torque. These motors are then mated to a 2.4L inline four gasoline engine, which by itself creates 145 hp and 140 lbs-ft of torque.

All in all, you’ve got yourself a rather well equipped minivan from a performance standpoint, shooting from 0-60mph in less than 11 seconds. This places it ahead of conventional front-wheel-drive gasoline vehicles in the same class, but being a lot more environmentally friendly along the way.

No word on pricing on this seven-seater hybrid, but the plans are for a JDM (Japanese Domestic Market) release only at this time.