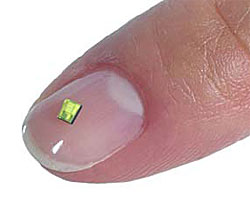 Having a flashlight as an accessory on a mobile phone makes perfect sense, but the push for smaller and thinner designs makes it difficult for makers to cram everything in that consumers demand. The new Luxeon Portable PWT light sources can change that. They can provide 26 lumens of light from an LED source, yet they measure just 2.0 x 1.6 x 0.7mm. That’s 75% smaller than most LEDs with the same light output, and 4.5 times the typical lumens/area.

The light source is designed for use in mobile devices and can be surface mounted for versatility. They have a usage lifetime of at least 2000 hours, so they will last for the usable life of most phones. The company doesn’t explicitly state it, but this pretty much has to be the smallest flashlight in the world. They cost manufacturers as little as $2.19, so they don’t break the bank or add significantly to the cost of devices.