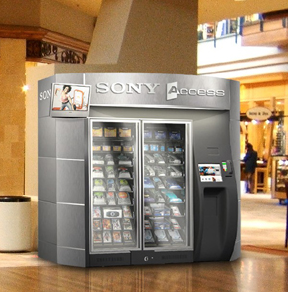 We’ve seen companies try to sell electronics through vending machines before, and some, including Apple with the iPod, have had success. Sony is jumping into the vending machine business in an aggressive way, though. Their new machines are called Sony Access, and they have been launched in partnership with Zoom Systems. So far they have been set up in malls in Atlanta, Boulder, Colorado and Santa Rosa, California, and more kiosks are on the way soon.

The kiosks, which aim to boost both sales and brand buzz, sell both devices and accessories. You can buy Walkmans, digital cameras and PSPs, along with the accessories you need for them, such as headphones, cables, and batteries. You can also buy recordable media, DVDs, CDs and PlayStation games. Each vending machine can handle 50 SKUs and has a 15 inch touch panel, along with sensors and internet connectivity to allow Sony to closely monitor sales.