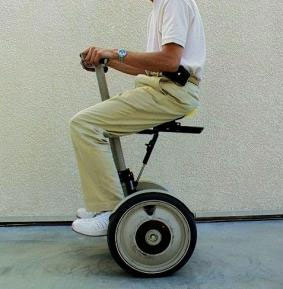 Think back. Way back to when the world was abuzz with what “Project Ginger” was all about. They told us it would revolutionize the transportation industry and we would never look at people movers quite the same way ever again. When the Segway finally made its official debut though, it didn’t exactly create the huge splash they were expecting; it was more like a raindrop in the Pacific Ocean.

Well, the Segway is set to receive a good shot of renewed life from a defibrillator. They’re throwing a seat on the thing, appropriately named the SegSeat, so that you don’t have to cruise around the sidewalk while standing up on your Segway. If you think it looks like one of those electric wheelchairs that grandma rides around on in her nursing home, you’re not that far away from the truth, because the SegSeat is intended for less-abled users who can’t stand for extended periods of time.

Sitting down won’t come cheap: They’re retailing the SegSeat for $750, and that’s on top of the cost of the Segway itself.