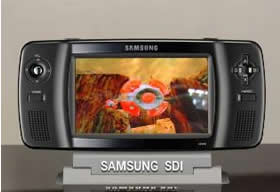 Get ready for another “world’s first” from our good friends over at Samsung. They’ve decided to take the day off from releasing a world’s thinnest or world’s smallest cell phone today and have just focused on one part of the technology: the screen. At the San Francisco Society for Information Display (SID) show, the Korean manufacturer showcased its 3D active matrix OLED display, said to the be first of its kind.

The prototype device on display was a 4.3-incher capable of shooting out an incredible WQVGA (480×272) resolution in complete three-dimensional glory. I’m assuming the “1000 times faster than TFT LCD’s” remark is in reference to the refresh rate, allowing for smoother image transitions, or as the “O” in “OLED” indicates, a more “organic” looking image.

While conventional LCD-based 3D displays have to cut their resolution in half when doing adding the extra dimension to the mix, Samsung’s prototype makes use of the “Time Division Parallax Barrier Method”, allowing the “same level of resolution even when users convert 2D images into 3D.”

They’re still working out the kinks however, with a “perfected” version ready by the end of next year to be implemented into TVs and notebook computers.