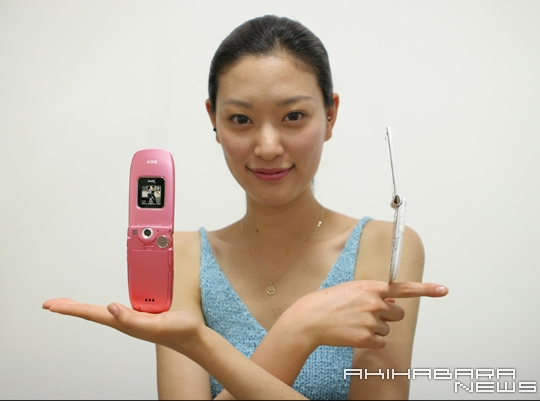 I needn’t remind you that everyone and their mother has realized that slim is in. From the ultra skinny iPod nano to the ubiquitous Motorola RAZR, just about every electronic device known to man has taken the skinny route when it comes to form factors. The good people at Pantech & Curitel are on that boat as well, jumping into the marketplace with yet another slim flip phone — the SKY IM-S110 — to join offerings from Samsung, Moto, and other handset manufacturers.

Available in girly-girl pink or “don’t let them hear you say it makes you think of Apple” white, the IM-S110 is being presented as a premium phone with an ultra slim profile. The 3.2 megapixel camera sounds about right for a higher-end phone coming out of Korea, as does the integrated MP3 player and FM tuner. No word on whether this phone rocks the Bluetooth, but I have a pretty good suspicion that it does. While the internal memory capacity isn’t mentioned either, we do know that you can make use of miniSD cards for expansion.

If you’re looking for a North American release date and price, you’re dreaming, as per usual, because this is mostly likely a Korea-only launch.