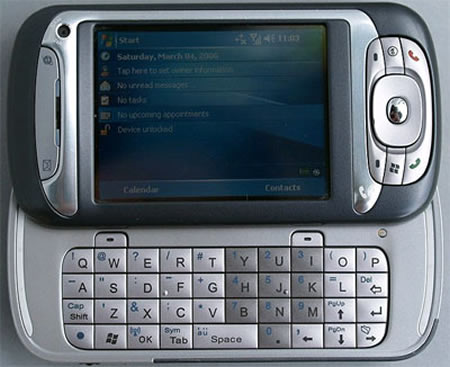 HTC, I *heart* U very muchie. I’m not alone in my sentiments toward the Taiwanese Windows Mobile smartphone maker, because there are a good load of companies that take HTC platforms and make the handsets their own, most notably i-mate, Dopod, and even T-Mobile.

While rumours and conjecture surrounding the HTC Hermes have been floating around the interweb for what seems like an eternity now, we’ve finally got the finalized deets on the QWERTY’d out handset. Powered by a 400 MHz processor, the Hermes packs 128MB of RAM, the same amount of storage space, Bluetooth, Wi-Fi, and a 2.0 megapixel camera. Juicy, I know.

HTC Breeze pics and specs have also been released, enlightening us on the candybar style phone. The screen is a decent 2.2-incher with QVGA resolution, and its got 128MB RAM, 64MB internal memory, Bluetooth, IR, miniUSB and a microSD expansion slot. Keep your ears peeled for release info as it develops.