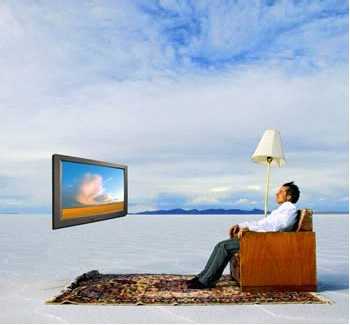 We’ve heard all sorts about wireless Internet in the past few years. Wi-Fi is all the rage, with hotspots popping up everywhere you look, even blanketing cities. Bluetooth is another hot property in the wireless transmission of signals. But what about TV?

Well, a company called Tzero Technologies has the answer to that. Researchers at Tzero have developed a wireless chip that transmits wireless hi-def digital video to a receiver up to 100 feet away.

In a word, wow. That means that we will eventually do away with those TV cables, but not our TV remotes.

We’d still need some sort of connection, receiving the original signal from the video provider. A cable connecting the receiver to your TV would probably be optional.

Tzero says it is aiming at the 802.11n market. Products that take full advantage of that new functionality aren’t exactly flooding the market yet, but they will be soon. Conceivably, you could use the Tzero chip to broadcast other kinds of digital information as well, such as data and audio.

The company also makes other wireless data products, so this 100-foot-range idea shouldn’t be too much of a jump. Tzero’s technical specs include the fact that their technology broadcasts over an ultrawide band at a very fast speed, perhaps up to 100Mbps, without losing signal quality or integrity.

The company says it will be able to show its technology off next month, with the first products capitalizing on the process to be shown off at CES 2007.