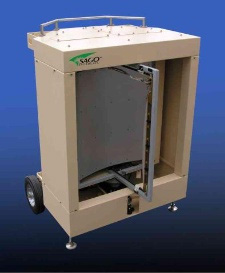 The designers of this one swear that they will use it only to find bombs or other weapons that airplane passengers are hiding in their clothes. We wonder, though…

Sago Systems has built what it is calling the ST150, a device that shoots high-res pictures of people passing by. Technically, it’s a millimeter-wave imager that translates the images taken through a Wi-Fi interface to a standard laptop. The clothes disappear, leaving what is underneath. In most cases, that would be only skin. In other cases, however, that would be threats.

“Suicide bombers remain a pervasive threat throughout the world and our goal is to identify these individuals and prevent their unconscionable acts,” said Thomas Fargo, Chairman of Sago Systems.

Fargo is a retired U.S. Navy admiral who has had the device tested by a handful of governments, including the United States. The device can operate from a distance, discreetly, or out in the open, as a warning.