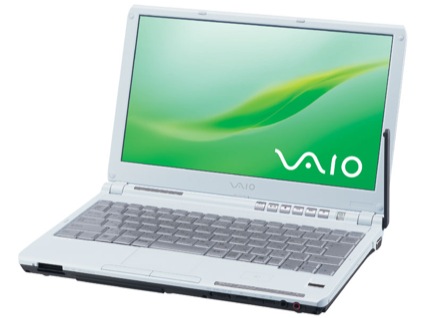 The general consensus on the net is that the Vaio line from Sony sure is pretty, but they aren’t the best machines in the world. I haven’t had a Vaio myself, so I can’t speak from personal experience, but hey, based on looks alone – and the sheer name recognition – Sony’s got some good stuff here. The latest addition is the TX3 lineup. The ultraportable, widescreen Vaios are bringing the sleek and sexy into the forum yet once again, and they’ve got a good set of features to go along with them.

You won’t be able to get a TX3 with Core Duo, it seems, having rather to settle on a 1.2GHz U1400 Core Solo processor (or worse yet, the el cheapo 1.06GHz Celeron M). The 80GB hard drive is fairly standard fare, as is the included dual layer DVD burner and built-in 802.11a/b/g Wi-Fi support. The tiny package is only 1-inch thick, sports an 11.1-inch LCD with LED backlighting, and rocks Bluetooth wireless technology. The higher-end TX72 version comes with a OneSeg digital TV tuner with iEPG programming guide.

Battery life is quite good, at ten hours with the Core Solo and seven with the Celeron. Available in limited-edtion blue or iPod-like white (just don’t let Sony hear you say that), the Sony TX3 line of laptops will run you about two grand nicely equipped.