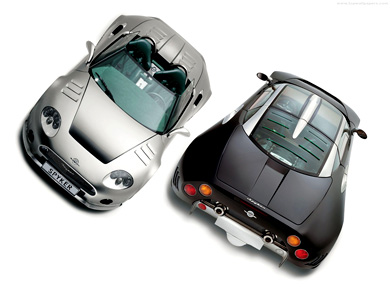 Jeremy Clarkson of Top Gear recently had the chance to take the Spyker C8 for a rip around the track, and his conclusion is that this incredible-looking roadster “goes like stink”, but really acts more like a fashion accessory than anything else.

With a tuned 4.2L Audi V8 engine under the bonnet, this car throws down 400hp (compared to the 360hp of the factory V8) and is capable of rocketing from 0-60 in a mere 4.5 seconds. Keep the pedal to the metal and feel that 354 lbs-ft of torque as your roar up to the top speed of 187mph. If that isn’t fast enough for you, they’re even working on a twin turbo version of this car from Holland, capable of 525hp.

Clarkson says that while the interior is “absolutely stunning” and the car “weighs the same as a toaster”, the handling is not very good. In addition to the “squealing understeer”, there are no luxury goodies to be enjoyed nor are there any airbags. But hey, you’ll look great pulling up to the valet in this “crazy” car.