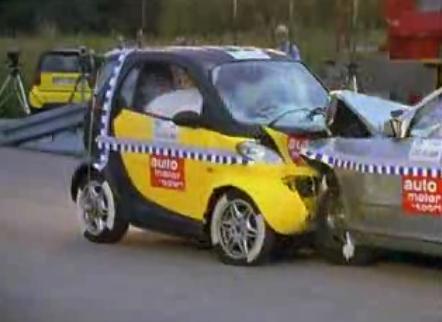 The Smart car from DaimlerChrysler has already been quite the success over in Europe, as well as in Canada, for its ultra compact size (a blessing for city dwellers trying to squeeze into the tightest of parking spots) and exceptional fuel economy, not to mention its unique appearance.

But with the imminent release of the Smart Car in the United States, its safety has been drawn into question again. Here’s a video of the Smart car going through a head-on crash test with a Mercedes S-Class, with the experiment apparently being put together by an “independent team.”

The ForTwo gets fitted with a couple of crash test dummies – sorry, they didn’t put (insert most hated celebrities here) in there instead – as does the Mercedes and they let the two cars rip into eachother at breakneck speed. The result? Well, watch the video for yourself, but let’s just say that the Smart crash reminds me of a game of craps for some reason.