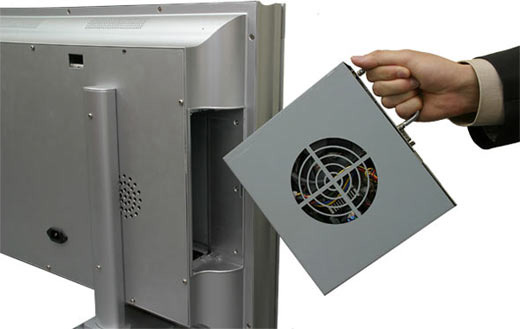 The latest PC version of the all-in-one machine is the Quixun GrandOpera LCD, out of Japan. The computer part of the apparatus is removable. It resides in a slot in the back of the giant monitor. The built-in handle on the PC unit makes it a snap to take out and take along with you. (Kind of gives a new meaning to data security, doesn’t it?)

At any rate, that portability also means relatively easy repair and upgrades. Its base specs are 1GB of RAM and 100GB of hard disk space, you also get two S-video outputs, two composite outputs and four USB 2.0 ports. About the only extra that doesn’t excite me is the TV tuner, which is merely analog.

The other handy part of the all-in-one idea is that if the monitor goes haywire or burns out, you don’t have to send the whole thing in for repair. Rather, just slip the PC unit out and ship that monitor off. Presumably, you have another monitor hanging around somewhere.