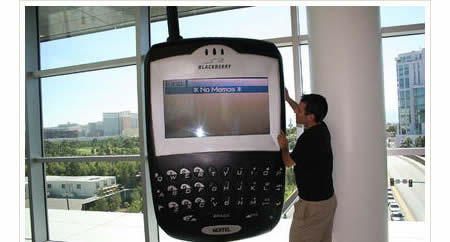 We seem to be very focused on making our devices smaller and smaller, but in Las Vegas, where everything is bigger and crazier, that trend is reversed. At the Nextel store in the Las Vegas Convention Center Monorail Station, there is a BlackBerry that is reportedly and believably the world’s largest. It’s not just for kicks, either. This huge device actually works.

Man & Machine had one of these devices at WES2006 and apparently is responsible for creating them. It’s just there to get the attention of passing tourists, and it obviously doesn’t have a future as a consumer device, but it’s still fun to speculate about. On one hand you wouldn’t go blind staring at the small screen and your thumbs wouldn’t be cramped from the tiny keyboard. On the other hand, mobility is a bit of an issue. Maybe some nice backpack straps on the back would let you carry it around.