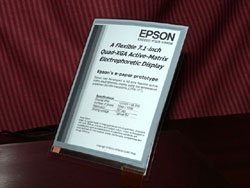 It’s not just weapons, medicine and classroom pointers that utilize lasers anymore. Now, they are being used to make a kind of paper.

Epson has unveiled a technology to create electronic paper using lasers. The requisite acronym is SUFTLA, which stands for surface-free technology by laser annealing. The process employed a super-thin film transistor LCD manufactured at a very low temperature to transfer data from its source to plastic film. The result is something that looks just like a piece of paper superimposed on an LCD. The resultion is 428×238.

It is the latest development in a years-long effort by Epson to develop what it calls “e-paper,” which can be rolled up and folded. Efforts in this regard began back in 2004, and the company hopes to have a full version of the e-paper ready for common consumption a few years from now.