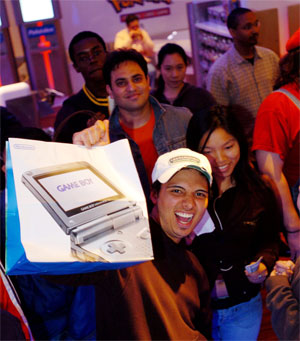 The battle between Nintendo and Sony over portable gaming supremacy just got a touch hotter because yesterday marked the official North American launch date for the Nintendo DS Lite, the lighter and brighter version of the big N’s dual-screened gamer. While players in Japan have been rocking the DS Lite for a little while now, Canadians and Americans only “officially” had a chance to pick up the smaller “touching is good” gamer as of yesterday… and they came out in droves.

Sure, a few lucky people had their chance to grab the DS up to two weeks too early from Target and Walmart, but for the rest of us, it was quite an event yesterday at the DS Lite launch party. In fact, some people even lined up “as early as noon on Saturday” to buy the DS Lite, which went on sale at midnight, Sunday morning. Among the bonuses that the dedicated gamers received were a free carrying case and a complimentary copy of Brain Age: Train Your Brain in Minutes a Day.