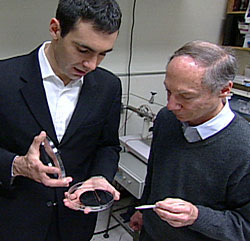 Charging the batteries of portable electronic devices takes time. In today’s always-on-the-go world, time is a luxury that we sometimes don’t have. Sometimes, you just have to go without your iPod or mobile phone or laptop while you wait for it to charge back up.

Some folks at MIT are working on updating past technology to fit current needs. They are pursuing the use of capacitors as chargers. These capacitors attach two metal electrodes together, creating an electric field of charged particles. The energy emanating from that field could be used to charge batteries in no time at all. Further, the batteries would hold more of a charge than normal, perhaps years.

So something old is new again. The capacitor is a relatively old innovation—by Moore’s Law standards anyway—and you would think that the size limitations of a capacitor would prohibit the kind of energy needed to charge up a traditional iPod battery. You’d be right about that, but let me assure you that the researchers at MIT know what they’re doing. They’re using nanotubes.

Yes, those tiny energy sources that are 30,000 times thinner than a human hair are powering this battery-charge revolution. The experiments carried out to test this idea involved covering an electrode with millions of nanotubes. The results were spectacular.

Tests are ongoing, and the technology is not exactly near being commercially available. However, such a breakthrough promises more similar results to come. Conceivably, any device that runs on a battery could benefit. I can’t imagine how many nanotubes you’d need to put on a hybrid car battery in order to charge it, but that’s the kind of future functionality that just might be possible using this kind of technology.

Environmentalists love the idea, of course, because of the promise that it brings in the name of cutting down on toxic waste. Those handy nickel cadmium or lithium batteries that you use in your flashlights, boom boxes, and other portable devices don’t exactly decompose overnight. Rather, they leak the chemicals that power them, letting cadmium and other toxic nightmares seep into the ground, where they stay, contaminating the soil and the groundwater for decades. Naturally, the Green folks are behind the nanotube effort.

Think of it: Plug in your laptop, brush your teeth, and your laptop is ready to go, fully charged. The solution just might be, well, nanotubular.