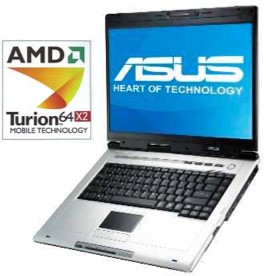 Intel isn’t the only dual core game in town – I don’t to tell you that – despite the fact that they are receiving much more attention for their latest processor innovation than their biggest competitor, AMD, and its Turion 64 X2 Mobile. Asus has buddied up with AMD, and they are now releasing the Z92T notebook which comes powered by a 1.6GHz TL50 Turion 64 X2 Mobile processor (what a mouthful).

In addition to the aforementioned processor (the lowest in the Turion line), the Asus Z92T also features a middle-of-the-road 15.4-inch WXGA display, an integrated 1.3 megapixel webcam, and a fairly beefy 256MB NVIDIA GeForce Go 7600 graphics card. Add to that a full gig of DDR2 RAM, a honking 100GB hard drive, gigabit Ethernet, and built-in 802.11b/g WLAN and you’ve got yourself a rather impressive package. Let’s not forget about the TV and DVI out, either.

The whole bundle is quite skinny at a mere 1.38 inches of thickness, and they’ve kept the price down to earth as well. Asus is asking for 1,199 Euros ($1542) for the Z92T in France. No word on a North American release.