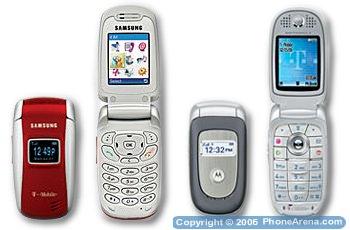 If you’re the kind of person that doesn’t need the latest gadgetry, and is quite content with having a cell phone that works well as a basic communication device, then T-Mobile has got a couple of new phones that are right up your alley. While the company keeps telling us to “do more” and “get more”, it’s somewhat counter-intuitive that they are promoting the new Motorola V195 and Samsung T209, a pair of clamshells that are about as entry-level as it gets.

The Samsung comes up pretty short on the features with nothing particularly noteworthy other than a “simple organizer”, instant messaging capabilities, and a built-in speakerphone. If you need to keep yourself completely wireless and make use of Bluetooth headsets, however, you’ll need to bump yourself up to the Motorola V195. In addition to Bluetooth, the V195 is also a quad-band unit and has voice activated dialing, but lacks a camera altogether.

But hey, these phones are dirt cheap. Lock yourself down to contract and you can grab the Samsung T209 (available in baby blue or dark red) for an Andrew Jackson, or you can opt for the Motorola V195 for $40.