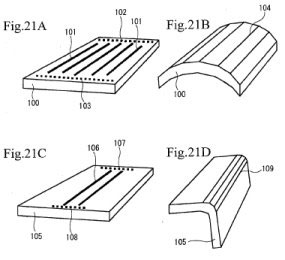 Microsoft has shown us their version of Origami, but Sony wants to give origami a more literal approach in the world of electronics. According to a recently filed patent, Sony is developing a line of electronics which would be completely bendable and foldable. The polymer-based devices would make it easier to be carried around. Both the case and the screen would be able to fold. That means better portability for phones, video game devices and even computers. You wouldn’t always have to contend with using a device that flopped around like a wet noodle, rather the material would be able to instantly shift between hard and flexible.

How it works seems a bit technical, but basically it is made up of conductive rubber bracing struts that are filled with silicone oil. Suspended in that oil are aluminosilicate particles in a gel form. A current passed through the struts clumps the particles together and hardens the device. It takes very little power to do this, so it won’t kill your battery.