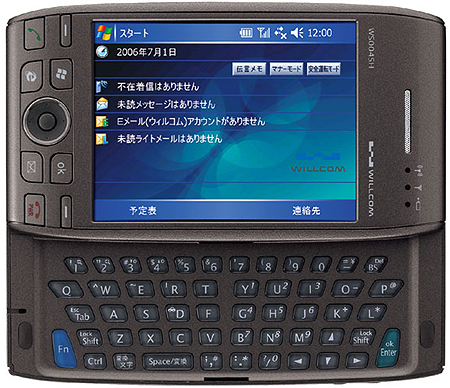 We first heard about this incredible smartphone last year, and have been drooling ever since. But just as we waited and waited for the Motorola Q to finally make an appearance, the same feeling is brewing up for the Sharp / Willcom W-ZERO3 which has just found itself an official launch date, and it’s sooner than you think. In fact, they’re planning on this QWERTY’d out PDA phone dropping on June 22. Yup, just two weeks away.

For starters, it runs on Windows Mobile 5.0 and is powered by an Intel PXA270 416 MHz processor. There’s 64MB of RAM to keep things running, and either 128MB or 256MB of available memory (we’re receiving conflicting reports). Other key features include a vibrant 3.7-inch screen, built-in Wi-Fi capabilities, a 1.3 megapixel shooter, and a miniSD expansion slot for good measure.

The design may seem a little familiar, and for good reason, because the platform on which the W-ZERO3 is based came from the same people that brought us the Wizard. Of course, I speak of Taiwan’s HTC. No word on pricing.