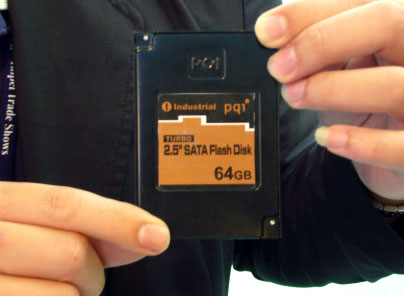 Remember years ago when you hoped that your USB thumb drive could one day hold as much stuff as the hard drive in your laptop? That day is getting closer and closer to fruition, because PQI has upped the ante on flash-based drives for laptops, possibly even capable of replacing the main storage device in your notebook, improving battery life by a substantial amount as a result.

At Computex in Taipei, PQI is showcasing their 64GB 2.5-inch SATA flash drive for notebooks, and they’re getting ready to actually start selling the thing by August. That should be ahead of Samsung and its 32GB version.

Price-wise, the two offerings are right in the same league with one another, because the 32 gigger from Samsung will reportedly sell in the $1000 range, whereas PQI is planning on a retail price of double that for their 64GB drive, which coincidentally has double the storage capacity. Transfer speeds should be pretty decent as well, reportedly 32MB/sec. Look for the PQI 64GB flash drive for notebooks at retailers in the US, Europe, Japan and China by the end of the summer.