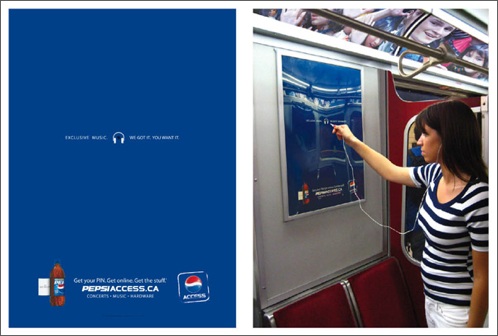 The latest in the ongoing battle between Pepsi and Coke for soft drink supremacy has gone high-tech, sort of. Brand recognition is huge, so you want your customers to be not only know who you are, but to constantly remind them that you are the better cola. That’s why Pepsi has launched an all new ad campaign along the subway systems in Toronto and Vancouver (where the subway is known as a “skytrain”, even though the section that heads through downtown is actually underground).

Citizens of those two Canadian cities will soon discover their subway cars clad with musical ads from the pop giant wherein users can plug in a set of headphones and listen to ads. Yes, because that’s what everyone wants to listen to on their daily commute: a Pepsi ad.

But hey, you can’t blame Pepsi for trying, since just about everyone rocks some form of portable music player these days, and hence has a set of earbuds on them at any given time. That said, if these ads just bust out tunes, most people would be more inclined to just listen to their own library… wouldn’t they?