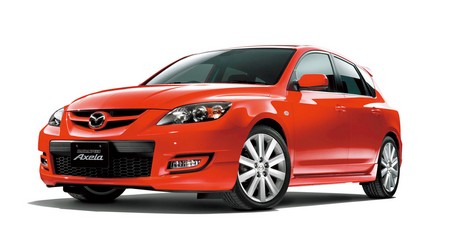 The Mazda 3 – known as the Axela in Japan – is one of the company’s most successful vehicles, appealing largely to the younger set of consumers who are looking for a peppy ride that is actually practical. As a follow-up to the Protégé, I must say that the Mazda 3 did quite well for itself. Apparently the engineers in Japan aren’t completely satisfied, and hence they are releasing a Mazdaspeed version of the hot five-door hatchback as well as upping the ante on the regular models.

Not only are they adding a few aesthetic things – like 18-inch rims, a rear roof spoiler, and new sideskirts – but they are throwing some rather significant performance upgrades as well. They’re offering the option for an all-wheel-drive system, complete with “Active Torque Split” for the 2-liter engine. The Mazdaspeed model stays as front-wheel-drive only, but receives a huge boost in power (no pun intended) from the MZR 2.3-liter DISI turbo, effectively throwing 260 horses under the hood and 280 lbs-ft of juicy, juicy torque. A torque-sensing LSD has also been included.

This is sort of a good news, bad news type of situation though, because the Mazdaspeed Protégé was the swan song for that model, so I can only predict that the Mazda 3 / Axela is gearing up for a similar fate, to be replaced by the next generation of fun, four-banging econoboxes.