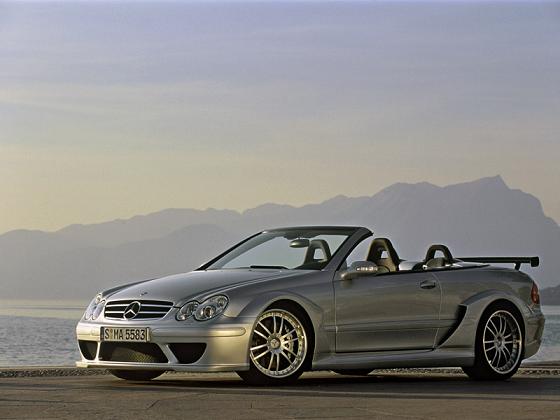 Just when you thought they couldn’t cram any more 3-letter acronyms into the model names of their vehicles, Mercedes is getting ready to release a whole new roadster onto the world. The 2007 CLK DTM AMG Cabriolet was first unveiled back in September 2005, but not only have a huge handful of new pictures been released to the public, they’ve actually started selling this incredibly peppy drop top.

And when I say peppy, I mean throw you back in your seat and have your cheeks shaking in the wind kind of peppy. This car is capable of rocketing from 0 to 62 mph in a mere 4.0 seconds, faster than several exotics that are currently available on the market. I guess having the AMG 5.4 liter engine doesn’t hurt, given that the V8 squeezes out 582hp. They’ve kept the weight down as well, but at the same time, it’s safe to assume that they didn’t skimp out on a couple of the luxuries we’ve come to know and love from the German automaker.

“Exactly the right car for quick trips around my home town [of] Monte Carlo” is how Mika Hakkinen of F1 fame describes the CLK DTM AMG. He is one of the first people to actually buy the hot vehicle. What? You want one, too? Then get in line, because they’re only making 100 of these beasts, and they’re asking for no less than 277,820 euros ($354k).