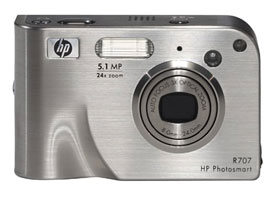 The HP Photosmart R707 digital camera has developed the nasty habit of lighting on fire. The batteries, which are non-rechargeable, have been seen to overheat when the camera is attached to a docking station or AC adapter. One actually did burst into flames on a docking station, causing smoke damage but no injuries. Needless to say, HP has issued a voluntary recall for the cameras.

HP has sold 224,000 of the cameras in the U.S. and 679,000 around the world between the launch in April of 2004 and April of this year. With that many on the market, and just one reported fire, HP will get some credit for issuing a recall already, though a cynic would say it’s just an attempt to head off lawsuits.