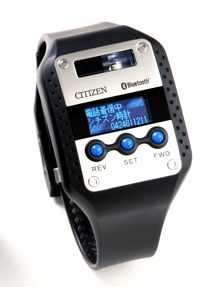 While Bluetooth enabled wristwatches have been making their rounds at the tech exhibitions for several years now – Seiko had prototypes on display as far back as 2001 – soon they will actually go on sale. The Citizen VIRT is the world’s first commercially available Bluetooth watch, beating Seiko to the punch.

While the unit that Seiko showed off in March won’t be available until next year, Citizen’s Bluetooth-enabled VIRT wristwatch is ready to hit shelves as early as July 7th. As expected, us poor saps in North America won’t be able to get our hands them just yet, because they’re limiting production to a paltry 5,000 units and the initial launch is planned for Japan only.

The Citizen VIRT alerts you of incoming calls via vibration and blinking lights, in case you don’t feel your phone shaking in your pants (then again, this could be useful for phones stuffed in purses, backpacks, and the like). Another feature is if you happen to forget your cell phone, the VIRT will let you know when it is out of range. Yup, no more leaving your phone at the gym and then wondering where you lost it.

No word on pricing.