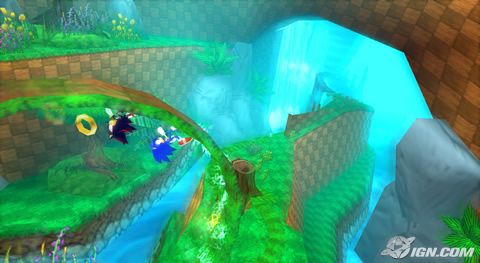 Since the lack of success with the Dreamcast, Sega has stepped out of the hardware race and focused their energy on creating top notch software. They haven’t forgotten the hedgehog that gave their company its prominent image though, and I don’t see them slowing down with throwing Sonic back out there to us, the video gaming public.

Not to be confused with Sonic Riders for the GameCube, Xbox, and PlayStation 2, Sonic Rivals is said to be an all-new, yet familiar experience destined for the Sony PSP. Much like the old Genesis side scrollers, you take on the personality of Sonic, Knuckles the Echidna, or Shadow the Hedgehog. Notably missing from the group is our good friend Tails.

The gameplay is said to be a mixture of “platforming and speed to form a competitive race title.” Whether this means that it’ll feel more like an action title or a racing game remains to be seen. What we do know is that they’re planning a November release for this sure-to-be popular addition to the Sonic franchise.