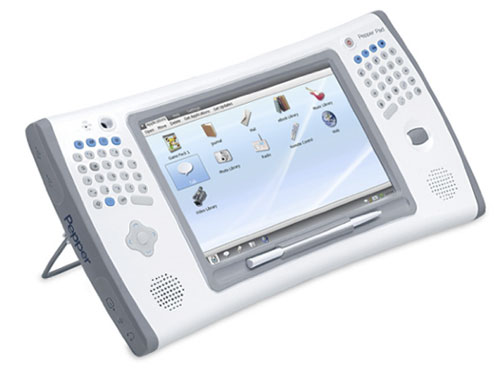 With all this hub-bub surrounding the Microsoft Origami Project and the release of ultramobile PCs (UMPCs), Pepper Computer got a little lost in the mix, and to many, the Pepper Pad is no more than a wallflower in this dance of portable computing. Not anymore, it seems, because the company is returning with renewed vigour and an all new Pepper Pad in tow, replete with a smattering of new features and selling points.

The Pepper Pad 3 (we never officially saw a PP2, though I guess the Pepper Pad Plus could take that title) is much like its predecessors, and is designed to be a portable “web player.” You can enjoy wireless internet, digital media, and remote A/V control with the PP3. They’ve swapped out the 624MHz Xscale PXA270 processor in favour of the AMD Geode LX 800 0.9 watt unit, throw in 802.11g Wi-Fi, and up to 50% percent improved battery life. Add to that an integrated video camera (webcam?) and UPnP support, and the Pepper Pad 3 starts to sound a little more appealing.

Tipping the scales at about 2 pounds, and measuring less than an inch thick, the Pepper Pad 3 (complete with touchscreen) should start shipping in August with a price tag of around $700.