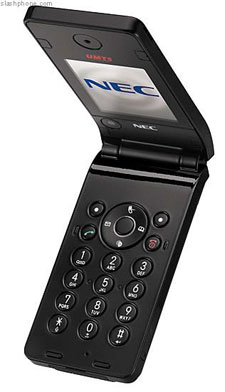 Don’t tell me that Motorola has the monopoly on the thin phone market with the RAZR and the SLVR. We already know that Samsung has taken the “slim” catchphrase and ran with it, along with “world’s first” this and “world’s first” that.

NEC doesn’t want to be left out of the skinny picture either, so they have a slim phone of their own but with distinctly square edges (typical of NEC). The e373 is a 3G clamshell clad in a beautiful black chassis.

Already released in Italy, this hot tri-band GSM/UMTS handset has recently been approved by the almighty FCC, so even people on this continent might be sporting this phone pretty soon.

Other features include a 65k color screen, dual camera module for video calls, built-in MP3 player, but a measly 32MB of internal memory. Worst of all, there is no expansion slot, so you’re stuck with the ability to only hold, oh, about 5 or 6 songs. No word on pricing.