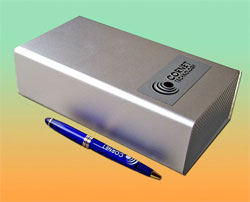 On the outside, it may look like nothing special. Just a simple aluminium box, brick-like in appearance, with a not-so-flashy label that screams “industrial strength.” Delve a little deeper, and you’ll quickly discover that this block houses a full terabyte (that’s about 1000 gigabytes, in case you didn’t know) of storage space. The 4.5 lb. Maximus Platinum drive from Cornet is the latest in ultra massive storage in a small-ish package.

While most people would probably hook this thing up to their laptop (or desktop, for that matter) via the provided USB 2.0 port, Cornet is also showing love for FireWire enthusiasts, allowing for connections in both the 400 and 800 flavours of FireWire. I don’t know anyone who still uses Windows 2000, but the Cornet Maximus Platinum drive will work just fine with that OS, as well as the standard issue Windows XP and Mac OS X.

Available now for $1,230, but for half the price, you could probably get away with making a similar massive storage device of your own using a generic aluminium case ($125) and a pair of 500GB hard drives ($250 each).