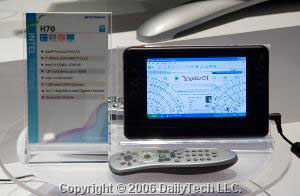 Why release one product when you can release a whole handful? That’s the philosophy of Elitegroup Computer Systems, Inc (ECS), at least at Computex this year.

The electronics manufacturer took the wraps off a bevy of pretty things, including a UMPC, a GPSTV, and a handful of mobile TVs.

The UMPC is leaner and less expensive than others of its ilk and boasts a flash media reader and a webcam.

The GPSTV doubles as a GPS device (thus the name), has a screen as large as 3.5 inches and also sports a QVGA touch-screen panel. You can plug in a SD extension pack; but if you’re looking for onboard storage, you’ll be disappointed.

The other mobile TVs have more of everything, as you would expect, including options to output to larger, more hi-def TV sets.