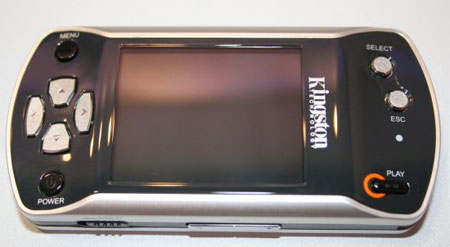 At the same time that many companies are giving up and getting out of a battle they can’t win against with the iPod, Kingston Technology, the company that has made its name by selling memory products, is jumping in with their first new PMP. It’s called the K-PEX, and it combines MP3 capabilities (along with OGG, WAV, WMA and others) with a 2 inch color screen capable of playing a full range of video formats. It has Windows Media support, and a second version is being certified for Play For Sure. The K-PEX also adds USB 2.0 interface, and a voice recorder and integrated speakers to expand the range of uses. A miniSD slot can upgrade the onboard flash memory, which will come in 1GB and 2GB sizes.

The K-PEX measures 3.7 x 1.8 x 0.6 inches and weighs 2.3 ounces. Kingston will launch it in Asia in August and then expand it to the U.S. At a price of $130 or so for the 1GB model, and $180 for the 2GB one, it remains to be seen how Kingston will make the K-PEX stand out from the dozens of similar players out there.