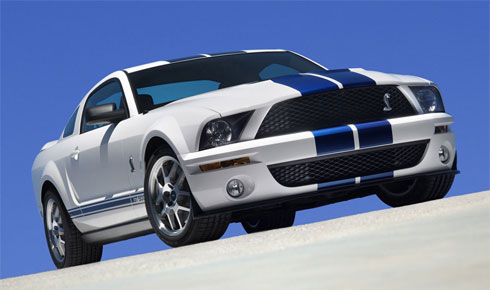 If you’ve been dying for your own 2007 Ford Shelby GT500 since Ford started showing them off, then you now know how many pennies you will have to scrounge together to get one of your own. The manufacturer’s suggested retail price has been set at $42,975 for the 500 hp coupe. That includes a destination charge of $745 and the $1,300 tax for the car being less than fuel efficient. The convertible will be worth $47,800. Those prices are a little higher than we were originally expecting. Originally, Ford had said that the price would be under $40,000, but they bumped that up by $10,000 in May.

Those are, of course, the retail prices. Dealers have been reporting that they are getting higher prices than that because of the demand for the hot cars – as much as $25,000 more. For example, the same car pictured is selling for $79,000 on eBay. A firm date hasn’t been set for the release of the cars yet, but a spokesman suggests that it will be here by the end of July at the latest.