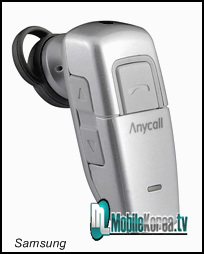 Bluetooth headsets are a huge market, not only for accessory makers like Plantronics and Logitech, but for the big cell phone manufacturers as well. It’s not difficult to come across a wireless headset from the likes of Nokia, Sony Ericsson, or Motorola, and now it seems that Korea’s largest mobile phone company, Samsung Electronics, wants a substantial bite out of the Bluetooth pie as well.

They already released a pair of Bluetooth stereo headsets last year, but for people simply looking for a handsfree way of continuing their conversations, the single ear version is much more appropriate. As such, the big S released the WEP200 onto the European and US market last month, selling over 100,000 units thus far.

The WEP200, powered by Bluetooth 2.0, provides up to four hours of talk time, or, as they put it, “four-hour non-stop communication.” Although they’re saying that the 9 gram unit is a slim 41.5mm x 18.8mm, the provided picture doesn’t scream skinny to me. Then again, they do say the camera adds ten pounds.