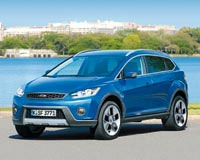 One of the fastest growing segments of the automotive market is the compact SUV. From the Toyota RAV4 to the Honda CR-V, people are looking for the “utility” of a sport ute, with the fuel economy of a four-banging sedan. Ford already has the Escape on the market, but it seems like the company is working on something even smaller: a SUV based on the Euro-spec Focus.

As you may or may not know, the Ford Focus that we receive here in North America is not the same as the one found on the other side of the Atlantic. Instead, the Euro-spec version uses the same platform – C1 – as that found on the Volvo S40 and Mazda3. According to a number of Europe-based weblogs, they’re going to use this platform to create an all-new sport ute, and as a result, there’s a good chance that the next generation of Escape will go a bit bigger as to not cannibalize their own market.

Among the things that are being said about this new unnamed SUV are that it will be a five-door five-seater with optional four-wheel drive, and it will start popping up on the streets of Europe in 2008.