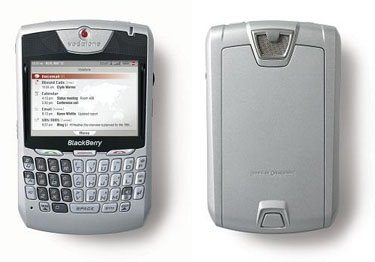 3G certainly doesn’t command the same level of attention as it once did, but today’s story is still quite noteworthy because we finally get an offering from the good people at Research in Motion, based out of Canada, with the ability to hop onto 2100MHz UMTS. The new BlackBerry 8707 will make its debut on the German arm of Vodafone.

As its model number implies, the 8707 is heavily based on the 8700, which was originally launched back in November 2005. You’ll still get the full QWERTY keyboard, push email, and all the other RIM goodies you’ve come to expect from a BlackBerry, but in addition to that, you’ll get to enjoy high speed data. GSM, GPRS, and EDGE are still applicable to this unit.

The square-ish display is 230 x 240 pixels of color, and there is 64MB of flash memory to accompany the 16MB of SRAM. Powered by a 312MHz Intel PXA901 processor, the BlackBerry 8707 also does the Bluetooth 2.0 dance and can double as a modem for your computer. No word on pricing.