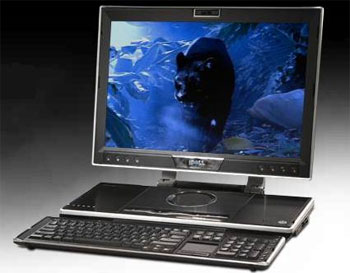 Dell is further blurring the lines between notebook and PC with its newest offering, which it calls a “mobile entertainment device.” The concept that was shown off at CES is now a reality.

The most notebook-like feature of what really is still a PC is the articulated hinges that can turn it into a portable computer. It has a detachable keyboard, but other PCs can make that claim. It also has a touchpad in the keyboard itself, which you can use instead of carting around a mouse. The 20-inch screen is also portable, but then so are most monitors if you’re careful in transit. End result: Without working a whole lot harder, you can take it with you.

That’s on the XPS M2010. The other model, the XPS 700, is a desktop that offers more of everything, including a greater focus on gaming. Guess that Alienware merger is having effects far and wide.