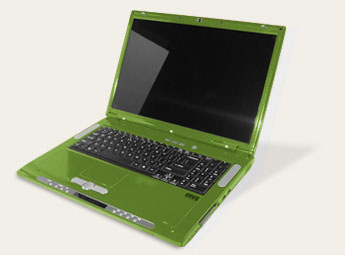 Now, correct me if I’m wrong, but I always thought the expression was green with envy, but I guess that doesn’t refer to the object of the envy, and only to the person who is being envious. VoodooPC is offering a 17-inch version of the Envy u:909, appropriately named (I guess) the Envy u:734. Clad in bright green (and many other colors too), this hot gaming laptop comes powered by a T2400 Core Duo processor, but if you choose to drop a little bit of extra coin, they won’t hesitate to throw in a T2500 or T2600 in its place.

Graphics come by the way of a nVidia GeForce Go 7900 GTX card, with its crystal clear output being showcased on the 1900 x 1200 pixel widescreen display. To truly feel the power this beast of a machine has to offer, you can opt for the full 2 gigs of RAM and the 160GB hard drive. Other key features include an 8x DVD burner, integrated webcam, and 4-in-1 media reader. As far as connectivity is concerned, they’ve got you covered too, with 802.11a/b/g Wi-Fi and Bluetooth wireless technology.

Tipping the scales at almost eight and a half pounds, the VoodooPC Envy u:734 has prices starting at $3,800. Orders are being taken now.