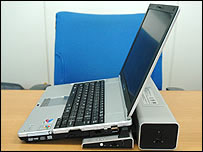 Computer users around the world have been waiting anxiously for a solution that will give us more than a few of hours of battery life on our laptops. There have been all sorts of prototypes shown off, but all of them have been anything but portable.

Toshiba has come the closest to creating something that may actually be practical. They have been working towards a solution for four years now and they have a goal of commercialization by next year. The methane fuel cell that we have heard so much about, is closest to to the market, and it just looks like nothing more then a fairly large docking station. It weighs about a kilogram. When you slide in a cartridge about the size of your printer ink the docking station will provide 10 hours of power for your laptop.

One concern that most users voice initially is safety. Toshiba has built in several different safety features to ensure that the methane does not leak.