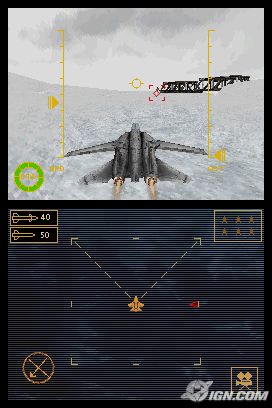 Tom Cruise may have come a long way since his days flying a jet plane in Top Gun, but the 1986 movie continues to be a cult classic. That’s why the Nintendo DS crowd is welcoming the video game rendition of the film with open arms, but the editors at IGN aren’t particularly happy with what they received.

There have been countless Top Gun video games over the ages, but this newest offering from Mastiff/Taito fails to impress. They’re saying that it “isn’t all that terrible”, but it doesn’t do anything to set itself apart from the crowd. What results is a “bland arcade game with some basic dogfighting thrown in”, very basic, in fact, because you can’t even perform a barrel roll.

Tom Cruise fans will once again be disappointed, because the Scientologist isn’t lending his likeness to this title, nor does he provide his face (or voice) to any video game for that matter. In the end, the IGN editors rated Top Gun for the Nintendo DS a 5.0 or “Meh”.