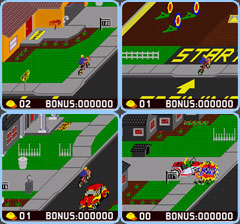 There’s no denying that one of the most influential video game systems of all time was the original Nintendo Entertainment System (known as the Family Computer, or “Famicom”, in Japan). The grey box of goodness housed countless classics from Duck Hunt to Excitebike, Double Dragon to Dr. Mario. Easily one of the most popular titles once found on the NES – Paperboy – is now ready to make the transition to the small screen, because it will be heading to a cell phone near you (maybe even yours).

Who can forget throwing the daily news through a neighbour’s window, or being chased down by the angry unleashed dog? Well, you can now relive your childhood as the arcade game has been ported excellently to compatible mobile phones. The gameplay is totally up to the challenge, producing a similar – albeit smaller – feel as the original. Don’t expect anything particularly innovative on this front, as the goal was to mimic the classic, rather than re-invent it.

Published by SEGA Mobile, Paperboy for mobile phones should be released soon.