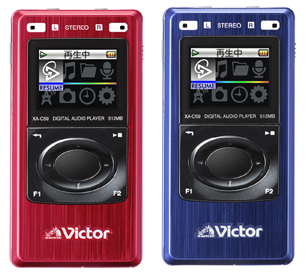 Yup, because we don’t have enough fairly standard looking MP3 players to choose from already, JVC has thrown a couple of new entries into the mix. The 1GB XA-109 and the 512MB XA-C59 are aesthetically identical other than the color choice, with a 1.27-inch color OLED display and — get this — a pair of stereo microphones mounted on the top of the players designed to record 2-channel WMA audio.

It’ll take on the regular MP3, WMA, and WAV stuff, as well as full support for PlaysForSure WMA. Other features include an integrated FM tuner, some strange F1 and F2 buttons on the face, and about twenty hours of battery life on a single charge.

Some have said that these new units are basically junior versions of the beefier six gigabyte XA-HD500, and they just might be right. The 512MB player runs 21,000 yen, while the one gigger is 27,000 yen. Yes, Japan-only these MP3 players are.