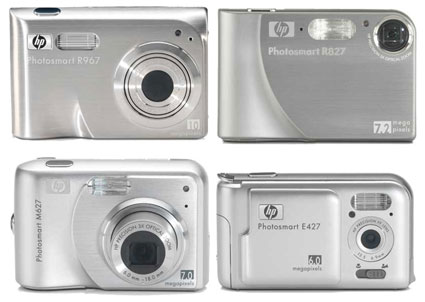 While high end photographers wouldn’t even think about HP when it comes time to replace their picture taker, the camera maker is quite popular among the family-oriented crowd looking for a decent point-and-shooter. The company has just announced four new additions to their Photosmart line of digital cameras: the R967, R827, M227, and E427.

They don’t come much more basic than the E427. Although it packs a more than adequate six megapixel imaging sensor, there is no optical zoom. But hey, it’s an absolute bargain at a mere $129 for a brand new camera. Step it up a notch and consider the 7 MP M627, which packs 3x optical zoom in a typical silver package. For an extra 0.2 megapixels and surely a few other bells and whistles — like a 2.5-inch LCD and an “ultracompact body” — you should take a look at the $299 R827.

The flagship of the bunch is the 10 megapixel R967. With 3x optical zoom, a 3-inch LCD, 32MB of built-in memory and technology to help prevent blurry pictures for us shaky-handed folk, the R967 is priced at $449.